The Difference Between Bulging and Herniated Discs.

The Difference Between Bulging and Herniated Discs

Did you know that back pain causes more lost work and productivity than any other medical condition in the United States?  One of the most frequent reasons for back pain is discogenic meaning pain coming from your spinal disc.   Most discogenic pain is either a bulging disc or a herniated disc.  Today’s article is breaking down the differences between bulging and herniated disc.

Firstlets look at the anatomy of a spinal disc.   In our office I like to compare a spinal disc to a jelly doughnut.   The disc is not a perfect circle but approximate that shape and has an inner and outer layer.   The inner layer is more of a liquid based material called the nucleus pulposus.   While the outer layer is a more fibrous or solid material called the annular fibrosus.  The outer layer helps hold the inner liquid layer in position.   When tearing or injury occurs to the outer layer the liquid inner layer can begin to leak its way out of its normal position and either exit the annular fibrosus completely (disc herniation)  or it can extend the annular fibrosus and cause the disc material to bulge (disc bulge).    Pain and serious symptoms are noted when the bulge or the herniation comes into contact with nerves as they leave the spinal canal. 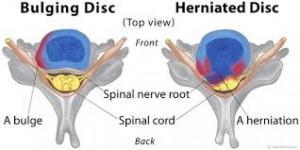 Bulging and Herniated discs in the neck or the back are actually very similar.   In fact many symptoms of bulging or herniated disc often look the same.     As mentioned in the anatomy section both can irritate or press on the nerve roots extending from the spine to various parts of the body – with the resulting pain often compounded by other potentially disabling symptoms such as numbness, tingling and muscle weakness.  Herniated disc because they have a more compressive nature are much more liely to cause pain than its counter part.   Herniated discs or bulging discs are most likely to happen in the cervical spine and the lumbar spine (neck and back).    The biggest difference is where symptoms are seen.   In cervical issues pain is seen in the neck and into the arms with complication such as numbness and weakness.   In lumbar disc problems pain is seen in the back and into the legs with complications such as numbness and weakness.

Surgery is often considered recommended as a last resort for treatment due to its more aggressive nature.   Still in some cases surgery is required.